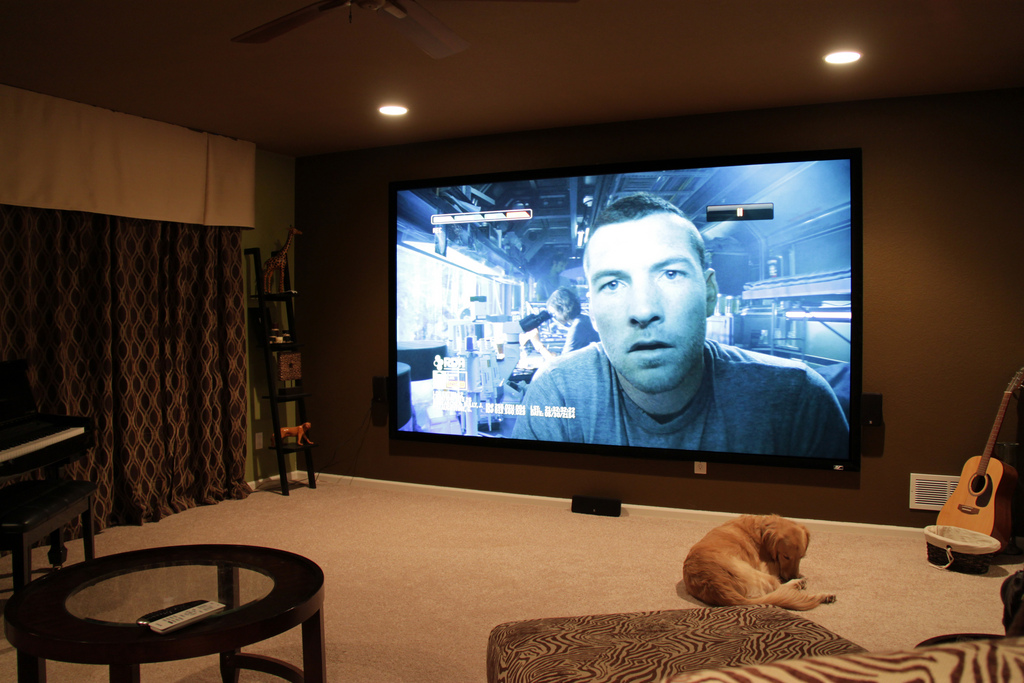 The Movie Theater Experience at Home!

To get as close as you can at home to the theater experience you need a projector. A projector will give you more than 100″ of movie presentation in your own home, making the little 55″ lcd your friends look tiny. And it’s much more affordable (cheaper than an lcd) than you think. These projector screen reviews should help you get really close to the movie theater experience at home.

It should be noted however, that projectors are a two-piece system. There’s the projector that gets all the attention, and the lowly screen that actually lets you see an image. This article is related to the Screen only. If you’d like to read our guide on choosing a Projector, go here.

There are many choices when it comes to screens. Here we go into what you need to know to make the right choice, especially if your budget is tight.

The most important thing of course, is to get the super-sized theater-like image you are looking for. Each projector outputs a limited amount of light. As the size of the image increases, the overall brightness is decreased. Projectors these days all can handily project a bright 100″ picture. Not the little pocket-sized projectors you may have seen during the holiday season though.

To begin with, lets think about the room you’ll be viewing in. With the average ceiling being 8 feet high, the screen height just might be your most deciding factor. The lower portion of the screen should not be too close to the floor, because if you put your feet up they might block the screen. Another reason to keep the screen a bit up from the floor, is where would you place the center channel speaker? You also do NOT want the screen too high or you’ll end up with a sore neck before the movie is half way through. Your eyes should be located somewhere near the bottom-third of the screen up to the center.

The Aspect ratio is the width of the screen compared to the height. All television high definition stations are 16×9. Using the aspect ratio for this, a 16′ wide screen will be 9′ high. Another way this can be shown is 1.78:1. Most movies use an even wider aspect ratio such as 2.35:1 or about 21×9. Almost all home theater projectors are 16×9 and they will output black bars at the top and bottom just as the TV you have now most likely does for these wide movies. Your screen could be 2.35×1 if you’d like, and the projector would simply project black unseen bars above and below it. Using this method however will show black bars on the sides, vertically for 16×9 content.

An alternate way to accomplish this without the black bars (expensive however) is using an anamorphic lens, (Panamorph). These require your projector (or an external processor as needed) to stretch the image vertically, the anamorphic lens is attached to the projector, stretching the image horizontally so everything looks normal. The wider image fills a 2.35:1 screen. Instead of simply zooming the picture, with a lens you’ll gain some light output because the entire display chip technology is being used, and perhaps gaining a slight amount of extra detail (due to scaling, and using the entire chip). The downside is you’ll lose some contrast due to the additional optics (anamorphic lens). In testing, the added brightness and apparent detail typically make up for the small drop in contrast. Some of these lens are more expensive than the actual projector so they are typically used only in high-end installations.

For a unique method; one that I personally use, you could try this $40 DIY option. Discussed over at AVS Forums here it uses yard sticks (yes, yard sticks) and fabric. Since the black bars projected on the screen are not exactly black, this option gives you a higher apparent contrast. Feel free to contact me for more information on this.

All screens have a gain. Gain measures how much additionally they can reflect light compared to a standard uniform reflecting surface. The screen will be “focusing” the light ideally towards your viewing position(s) instead of the perfect surface (also called Lamertian) which will reflect the light in all directions.

This does not mean that a 2.0-gain screen will give your projector’s image the appearance of being twice as bright as the same projector on a 1.0-gain screen, but it will be noticeably brighter. There are many different variables that mean the exact amount isn’t quite as simple as a single number.

With high-gain screens, you might end up with “hot spotting” where the center of the image is much brighter than the edges. If your seating area is extremely wide, the image won’t be as bright for those viewing off to the side, as the light is “aimed” more for those seated in the center area.

We do not recommend buying a really high-gain screen. Projectors available these days are bright enough, and we prefer a smooth, even-brightness image instead a few extra footlamberts of brightness.

We suggest going with a 1.3 gain or lower screen. If you have a lot of ambient light entering the room or view in the daytime with some curtains open, you might want to look into a grey material screen. 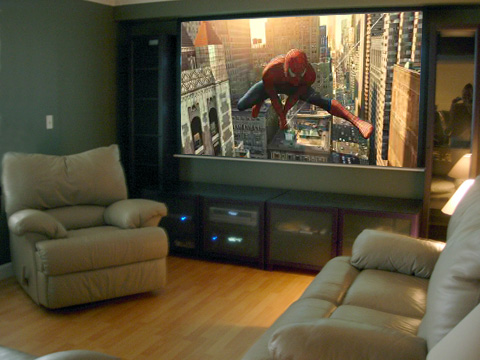 Contrary what many may think, projector screens are not all made up of the same type of material. The most basic screen available you can buy is a smooth (typically vinyl) material with a reflective surface coated (and sometimes painted) on it.

Screens are also available as perforated and woven. These are useful if you want to mount the speakers behind them. Having voices come from directly behind the screen is similar to the movie theater and it will keep your speakers from taking up floor space. However, you will lose some of the light and contrast. Depending on the type of screen, if you sit close enough you’ll also see the texture of woven screens. Also if you wall-mount your screen, you will need to place the speakers inside your wall. 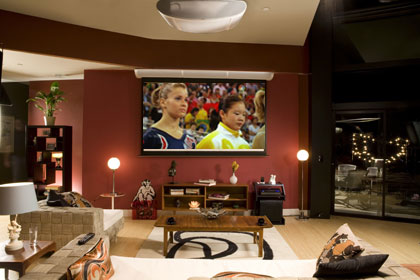 Matching your projector with the right screen is critical to getting the best picture. How much to spend? The prices for screens range from under $100 to $1,000’s. The cheap models may not have the gain, ambient light blocking, attractiveness, motorization, and other features of the more expensive screens, but they should give you a smoother picture than just projecting onto a painted wall (Unless painted specifically for a projector, of which we are not going into here as it can be a big undertaking).

We’ve seen many people place a roll-down screen (manual or motorized) just above their 60″ LCD screen. This allows them to simply roll the screen down in front of their normal TV for watching movies with a more realistic big-picture Home Theater. This is our favorite way of doing this without the need for a separate viewing room

However you use your projector and screen, we’d love for you to send us your photos for use on our site, thus giving others some ideas of how they could turn a normal looking room into a Home Theater.

We suggest taking a look at the Model B by Dalite, the same one I personally own and use which is 106″ diagonal. 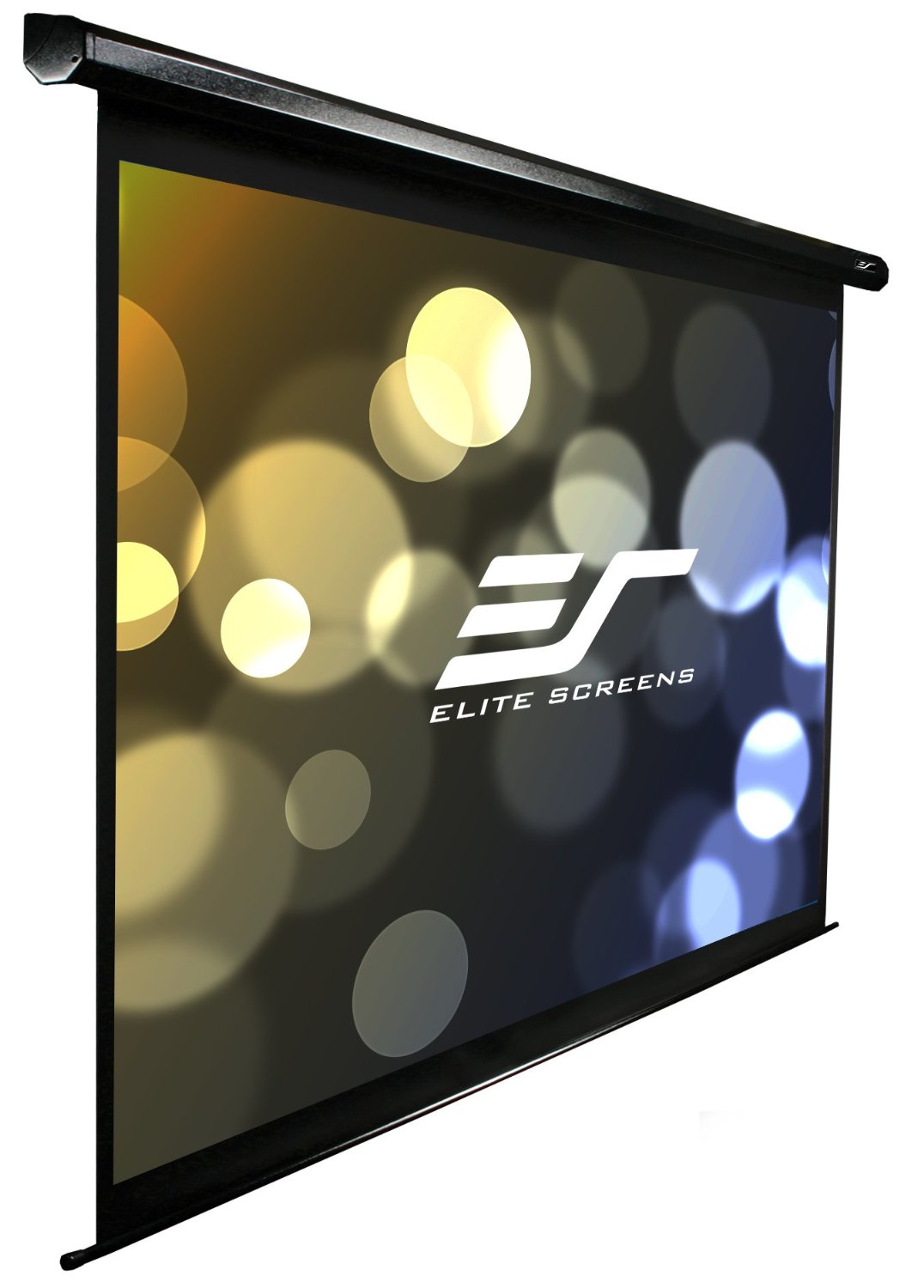 These can be mounted directly on the wall with the appearance of a large wall sconce, or hidden in the ceiling. Be sure to verify what size the power cord is located on, or if it can be relocated easily prior to shipment if this is important to you. Here is one of the most affordable, yet reviewed nicely options.

If these projector screen reviews and guide were helpful to you, we suggest taking a look at our other reviews here.