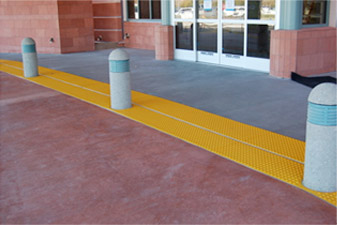 Warnings: Where did those crazy yellow bumps on the sidewalk come from? Have you noticed over the last couple years truncated domes going in just about everywhere? Annoyingly so at grocery stores where customers gingerly push shopping carts full of fragile eggs and other items over them. Even at nightspots where women in heels must tread carefully. Read onward to understand what this requirement is and how architects/owners can comply.

Now that we have an understanding of when and why the truncated domes are required we can look at the ADAAG requirement in depth.

1991 ADA Section 4.29.5 Detectable Warnings at Hazardous Vehicular Areas. If a walk crosses or adjoins a vehicular way, and the walking surfaces are not separated by curbs, railings, or other elements between the pedestrian areas and vehicular areas, the boundary between the areas shall be defined by a continuous detectable warning which is 36 in wide, complying with 4.29.2

(Not quoted here, but it should be noted that they are also required along the edges of boarding platforms in transit facilities and the perimeter of reflecting pools.)

So we can see that these truncated domes indeed are required at not only grocery stores, but at shopping malls and the like as well. From my conversations with various building officials it appears the requirement is in effect at the location where a pedestrian is leaving a “safe” zone and progressing to a hazard area such as a parking lot or similar used area. It also appears they will be required at curb-cut ramps at streets! I’ve lately seen these going in at various intersections. Due to the enforcement being only during a new renovation typically, and the cost exceptions allowed by the ADA it will be awhile before we see them everywhere. Here in Southern California however, they are taking shape rather quickly. It will only be a matter of time until they are at all streets, including residential. 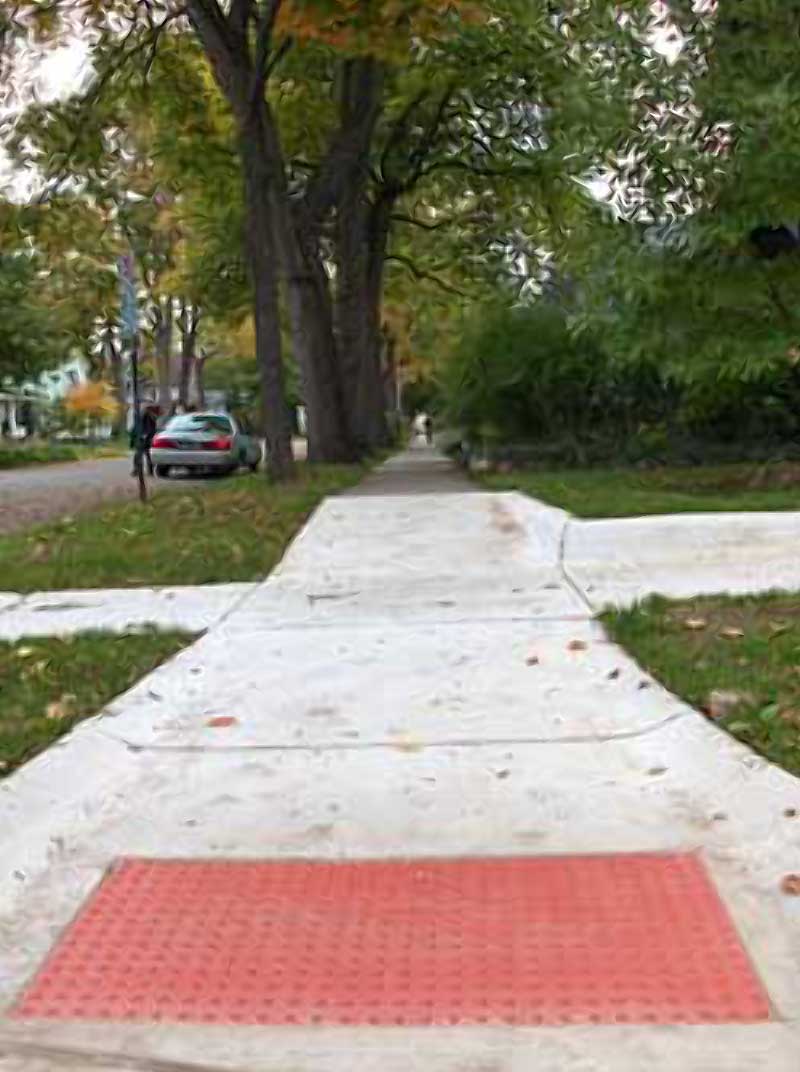 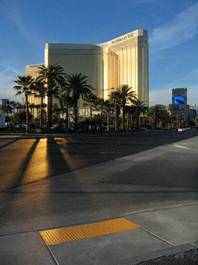 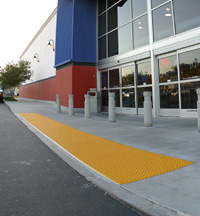 Section 4.29.2 (referenced above): Detectable Warnings on Walking Surfaces. Detectable warnings shall consist of raised truncated domes with a diameter of nominal 0.9 in (23 mm), a height of nominal 0.2 in (5 mm) and a center-to-center spacing of nominal 2.35 in (60 mm) and shall contrast visually with adjoining surfaces, either light-on-dark, or dark-on-light.

The material used to provide contrast shall be an integral part of the walking surface. Detectable warnings used on interior surfaces shall differ from adjoining walking surfaces in resiliency or sound-on-cane contact

Specifics from the 2010 ADA Standards:

Section 705 includes the following graphic and in addition:

(Certain locations may require the color to be Federal Yellow #33538, so please consult your local building official to be certain as the contrast requirement still applies as well)

For the requirement at curb ramps, this graphic from the access-board.gov indicates a 24” wide strip of truncated domes is required.

Types of Truncated Domes and their installation:

Cast in place systems: Set directly in new concrete. Most durable, but expensive for retrofit work such as with a T.I.

Note: Detectable direction and guidance tiles to be covered in a future article

Well, I’m not certain what to say here, other than add them to your plans and if your wife is wearing stiletto heels, please warn her before crossing! Also be sure to review the various application methods to be sure you’re specifying what’s appropriate for the project to avoid a bumpy road related to maintenance. See below for recommended reference material and items every architect/owner should have on-hand.

Getting the best price tip! You can add an item to your cart on Amazon at any time and don’t have to purchase right away. Each time you visit your cart Amazon will note at the top any pricing changes. Your own personalized price-tracking tool. Makes it much easier to track what you want to buy later.

A guide with commentary

Includes most ADA and the requirement for code compliance in California

CalDAG 2011: An Interpretive Manual and Checklist
This is THE book to own. This is the go-to reference manual that you will get the most use out of. It’s probably at 99% of California architect’s offices. It’s the only book available combining and cross-referencing 2010 California Building Code regulations with federal ADA requirements!

Official documents: Most government documents are now available for free on the web.